“The Black Bruin name is not yet so familiar among the customers, but they know the motors and refer to them as Valmet motor or as Finnish motor,” Morten says. He thinks that the biggest advantage of the Black Bruin motor for the marine industry is the fact that it is very compact and has the freewheeling option: “It is one of the biggest advantages, the freewheeling function of the motor. And then you have two speeds and a brake, and all that in one small package.”

Norwegian market for Hydraulikkteknikk is based on fishing

Hydraulikkteknikk has some agriculture and forestry customers, but they deliver mostly to marine applications, mainly winches. This focus is easy to understand considering that only 4% of Norway is arable land. The agriculture business in Norway has not yet discovered the benefits of Black Bruin’s freewheeling function, and the business in that sector is very small, with only 2 or 3 manufacturers. “The production of this type of machines that need the free drive is very limited,” explains Morten and continues: “And on the forestry side, there is no producer that manufactures harvesting heads or harvesting machines in Norway, only one producer of trailers. If you want to sell and make some money, then it has got to be the marine market.”

The fishing industry in Norway is always going up or down like the waves. Morten explains the industry’s cycle: “But you always know that if it is going down, then it will go up in 2 or 3 years.” The last few years have been good for fishing in Norway. It is also a business where the Norwegian government and the EU are continually changing the rules, and whenever the rules change, investments are necessary, because then the fishing fleet needs retrofits and modifications too. The North Sea fish situation is really good and the fisheries are in great shape. Morten´s customers fish mainly for cod – incidentally Morten´s favorite fish  – and also king crab.

There’s a lot of competition in winch building in Norway, with 5-7 producers. Three specialize in smaller boats and the 4 others in bigger vessels. Nowadays Hydraulikkteknikk delivers to the whole scale. The small boats, up to 60 feet, which sail along the coast with crews of 3-6, have traditionally been supplied with the Black Bruin BB-series motors. In 2020, the company had a major triumph supplying the bigger winches with the Black Bruin S-series motors.

Morten explains the nature of Hydraulikkteknikk’s business: “We have been limited by size earlier and mainly supplied the fishing winches for smaller boats, not big boats, but now, with the new Black Bruin S-series motor, we have been able to break into the bigger winches segment. With the new S-series, we can supply bigger vessels that go to Greenland, Iceland and the far north. That will be a very promising market for Hydraulikkteknikk in the future.”

Hydraulikkteknikk supplies motors to winch builders, who service their winches onboard the boats. The company does some servicing itself on some of the motors, but not that much. “The reason for that is simply that the motors are so good that they do not need much service,” Morten says proudly.

The nature of the Norwegian market

By and large, the service sector in Norway is struggling as it is everywhere else, but industry is going nicely, for example Hydraulikkteknikk has had its best year ever. The problem is more the fact that while in Norway it’s pretty much “business as usual”, partners elsewhere have problems. “We are dealing a lot with Italian companies and we have problems sourcing the parts from them. Our Norwegian customers do not understand that Italy is going really, really slow and that they just cannot supply the products at short notice. We have been patient with that, as we want to be a good partner and also to be a dealer that does a good job for our suppliers. We stay with them and do not jump on another wagon,” Morten underlines.

Hydraulikkteknikk’s policy has always been to keep motors in stock. This is how Morten explains the company’s success: “If your motor breaks down on a big vessel, you just can’t afford to wait, every day costs you money and time as the time period when you can catch the fish is restricted not only by nature but also by legislation. The season may be only 3 months in a year, so you do not want to miss a single day.”

Norway in general is doing well since the country has reserve funds to help people and industries. Morten appreciates his country´s government: “In my opinion, our government has been doing a great job. They have saved the massive oil revenues and not blown it all at once, as has happened in some other oil-rich countries.

Is he a fisherman?

That’s what you might think, but Morten spends a lot of his spare time up in the mountains where he has a cabin, about two hours’ drive away from his main residence. He likes to go cross-country skiing, now with his skin-skis, which he bought just last year. “I just love them, because they are so easy and require no waxing,” says the happy guy from the land of skiing legends.

Steep mountains, lots of snow, narrow streets and soft terrains. A tractor equipped with a front loader and driven trailer is enough to replace the normal trucks, loaders and dumpers.

No hill too high for Göweil’s baling customers

Baling and wrapping technology specialist Göweil has its design, development and production facilities in Kirchschlag, 20 km north of Linz in Upper Austria. This is one of the reasons why they are specialists in agricultural machines for mountainous terrain. Göweil’s customers work on steep and rugged terrain and sometimes need help to get those machines up the mountain – and safely down again. 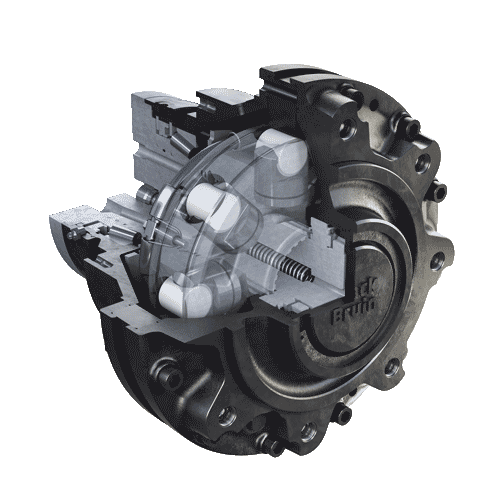 Most of us agree that technology is here to stay, no going back to the time without it. To save and restore the environment, more efficient and reliable technology is essential. As a 60-year-old innovation, Black Bruin hydraulic motors have indeed endured and are proud to be sustainable in the truest sense of the word.