Jiri, Pavel and Jan were schoolmates from age 9. Several years later, after their various studies – including engineering studies in Prague for Jiri – and working among other things in Sweden as ”guest workers”, they together founded a company specializing in forest, agricultural and municipal machinery. The company was named after the initials of these entrepreneurial young men. At the end of July 2020, this company with many strategically targeted websites has started as a Black Bruin distributor in the Czech Republic – or Czechia as the locals prefer to call it. JPJ is also the Black Bruin distributor for Slovakia.

Loggers and farmers as their main target groups

Situated an hour’s drive from Prague and close to the biggest Czech mountains, JPJ Forest is in a good position to serve the forest and agricultural industries. Although the forests in Czechia are smaller than, for example, in Finland or Sweden, all major forest machine brands are represented there – John Deere, Ponsse, Komatsu, Rottne… And according to Jiri, there are many special trailers in use in Czechia and Slovakia equipped with Black Bruin motors. JPJ Forest wants to start actively supporting them. In agriculture, JPJ Forest wants to find a role as an intermediary between Black Bruin and the agricultural machine manufacturers. According to Jiri, responsible for company strategy, Black Bruin’s radial piston motors fit the company’s offering just fine. And the same goes for the Black Bruin rotators.

And Jiri mentions one very interesting piece of statistical information: “With 246 m3/ha/year, the Czech Republic is on the fourth place in EU in the yearly growth of forests.”

What Jiri appreciates especially in the Black Bruin rotator is its accuracy and control. ”For example, you can stop the harvester head when you want. And the torque is higher than with competing products,” Jiri describes what he and his customers value most in the Black Bruin rotator. ”Its stability – day after day and year after year, and that is so important in the sectors we serve. The rotator pays itself back fast,” Jiri continues.

The situation in Czechia

In a world full of challenges, the forest industry in Czechia is currently enjoying the benefits of a rather wet year. ”Although the Czech economy at large is heavily dependent on the automotive industry – and therefore somewhat in the minus this year – the forest industry is doing well,” Jiri explains confidently. “Also, the beetle which has been a problem in the Czech forests, the notorious forest bug, is less active in rainy weather,” Jiri continues.

As for how to approach the loggers, farmers and machine manufacturers and convince them of the technological advantages, Jiri says that they have bought a 6 000 m2 old textile factory for that very purpose. ”Our customers want to see and test hands on. That’s the only way to make them happy,” Jiri describes the Czech mentality. JPJ Forest also has flourishing Facebook activity – now with some 10 000 fans – and the company also have a vivid YouTube channel.

Being a Czech company, JPJ Forest is, of course, a sponsor of the local ice hockey team but Jiri himself does not play. ”At the moment, my only hobbies are my wife, two boys, dog and gardening, potatoes, tomatoes and other vegetables plus fruit trees,” Jiri describes his own spare time. Come to think of it – there may not be that much spare time there then after all.

JPJ Forest has been engaged in the import, production and sales of professional forestry, agricultural and communal machinery since 2009.

Steep mountains, lots of snow, narrow streets and soft terrains. A tractor equipped with a front loader and driven trailer is enough to replace the normal trucks, loaders and dumpers. 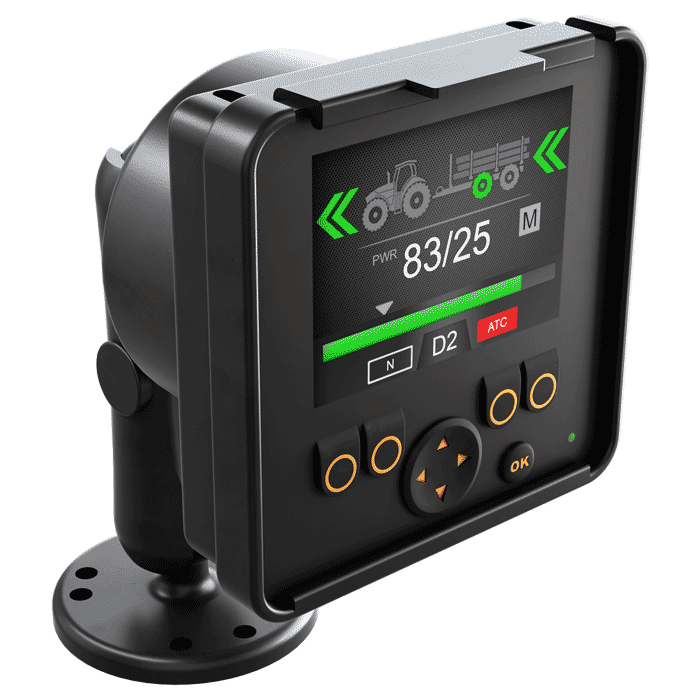 Trailers with driven wheels offer many advantages for tractor operators. And now even more so when Black Bruin makes the Hill Descent Control available for its On-Demand Drive System. The HDC function helps control the vehicle combination and improves safety when driving down steep slopes.