Black Bruin S-series industrial motor was found ideal to rotate the massive drill. S-series hydraulic motor can transmit high torque at low speed, characteristics needed when drilling into the ground. Another great advantage is that top-drive auger can shift on the fly. Contractors can drill, retract the auger, and spin off dirt without stopping the operation.

The machine can drill at two speeds: 0 to 30 rpm at 5,500 psi or 60 rpm at 3,000 psi. Operating speed can be changed automatically on the fly depending by ground conditions to ensure highest productivity possible.

Once the auger has drilled to the required depth, concrete or other material can be pumped into the bottom of the hole though the hollow center of the auger as it is pulled out from the hole.

“We decided to try a new product for our Drill Program to keep moving forward with technology”, says Jerry Cors, who dubbed new line of Top Drive Auger the BB series. “We knew this was going to be a challenge due to the high demands on these motors in the foundation drilling industry.”

During the first two years of field testing with the prototype drill, APE personnel tore down and inspected the Black Bruin drill motor a number of times for wear and tear. There was a time or two that the motor actually failed, not because of the Black Bruin hydraulic motor in itself, but because of the application and manifold valving that was needed for this application that was missing in the previous line of drill motors APE used.

“We found heavy cavitation in the motors that caused these failures, which took us back to the drawing board to find a way to prevent this from happening in our drill applications,” says Chief Engineer Dan Miller, APE. Miller took a close look at the manifold design and the valving in this application to pinpoint the failure points. “We need to try to make this drill fail under a load here at the shop.”

APE rigged up a 16 ton diesel hammer piston to mimic the load characteristics of a jobsite application and put the drill to the test.

Through this extensive testing, with the help of Kris LaVigne from Hydra Power Systems and the slab crew at APE, they were able to identify the failure points and correct them through the new manifold system created and designed by Dan Miller and Kris LaVigne.

“I was instructed to try and break this drill in the testing stages”, says Chris Hoke, National Service Manager of APE. “With the new manifold system this BB Drill is now bulletproof!” APE went through several versions of the BB Drill manifold systems to get to the current production model.

In one of the final tests the new BB Drill made holes twice as fast as the older Drill, mostly thanks to the ability to change the speed on the fly.

As a result, APE leads the foundation equipment race in the North America with more powerful line of Black Bruin Top Drive Augers. APE customers are eager to use these above any other brand of drill because of the high performance and durability of our Black Bruin product.

“When we have multiple jobs going at the same time, our ground crews battle over who will get the BB Drills on their site,” says Joe Gruber of Goettle, Inc. “The APE BB Drills outperform any of our other drills we have in our fleet, hands down!”

“We love our BB Drills so much that we name them. The crews that use them ask for them by name,” Daniel Lane of Longfellow Construction. “We use our drills in multiple applications and they get the job done.”

“We have purchased several of the APE BB Drills in the past few years. These drills have met our every need and expectation,” August Beck with AH Beck Foundation. “We have had zero recordable downtime instances since we purchased these units.”

Above are just a few of the testimonies from some of APE´s best customers.

To wrap this all up, APE strives to be number one in the foundation construction equipment industry in the North America and with the help from Black Bruin hydraulic motors they are the leader in foundation drilling technology!

American Piledriving Equipment Inc. is a leading supplier of drills, piles and piledrives for contractors and construction companies to build deep foundations for buildings, bridges, powerlines, utility towers and structures of all sizes with modern green technology in North America. APE Drilling and Piling Products HQ is located in Magnolia, Texas, USA.

APE decided to try a new product for their Drill Program to keep moving forward with technology. As a result, APE leads the foundation equipment race in the North America with more powerful line of Black Bruin Top Drive Augers. 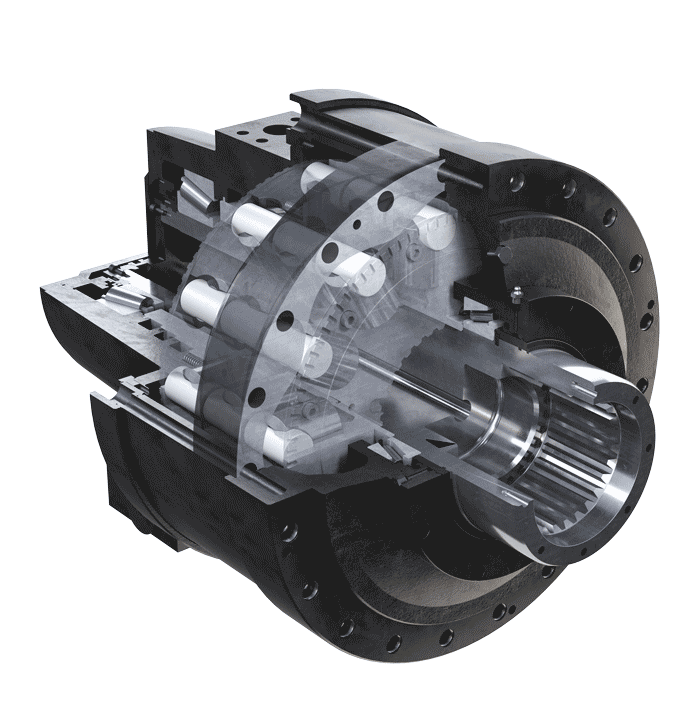 For almost 60 years Black Bruin Low-Speed High-Torque motors have powered various industrial applications worldwide. This extensive experience in the field of radial piston-cam ring motors is behind the new S Series. These Industrial Hydraulic Motors with a rotating shaft, are the most powerful Black Bruin’s, rated up to 18900 ccm and 500 kW.